Of course, Lucy has not actually been anywhere.  My computer limped along, allowing me to read your blogs but not to comment.  Or to post on my own blog.  What with the holidays and so many other things going on, I did not get a new laptop for a while.

It became more and more clear that my laptop was seriously impaired so I had it checked and was told that if we were lucky, they could obtain the really important data from it.  But there was nothing to do for the major problems with the C drive.  I was lucky.  The computer expert was able to pull all the data from the laptop.  Off I went to get a new one and in no time I was back in action.  I am totally in love with this new one.

Turns out that 2016 had one more kick in the posterior for us.  We have an injured player again who is impaired and awaiting surgery in early February.  We will definitely be able to call him a bionic man because of his metal joints.  So while I am back in cyberworld, I am also back in the real work of undertaking all the work of maintaining the household.  So I won't even try to post on a regular basis, but will hope to give you some glimpses of our Lucy in action.  (Or inaction as the case may be.)

This week we had record high temperatures, so it's hard to believe that we had 12 inches of snow just a few weeks before.  I managed to keep up with shoveling the decks and made a three-foot wide path up the driveway to the street.  Several people walking their dogs offered to come back and help.  I explained that we weren't going anywhere but thanks, anyway.

Lucy "helped" me by running zoomies in the snow until I finally made her stop and took her inside.  Goodness knows, we don't need another joint injury around here.  I was too busy to take any photographs, but this one from last year is exactly what she looked like. 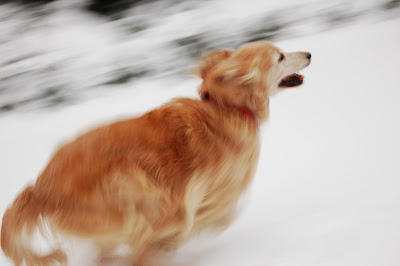 I had no plans to shovel the entire drive since I knew we would not get out anyway.  But the next morning, I heard people outside.  And there were three of our neighbors with their shovels working on the drive.  I grabbed my shovel and went out.  We had such a good time, catching up on the latest gossip and shoveling the snow.  In fact, we had so much fun we decided that we would gather and do all the driveways next time it snows.

While I'm glad to be back,  but I will not be posting much since I have more important duties at  home.  Good thing, too.  I can more easily avoid the "news."  I've changed from a news junkie to someone who avoids it all.

Today's quote is from Henry Ford:

When everything seems to be going against you,
Remember that the airplane takes off against the wind, not with it.

WE NEED ONE ANOTHER MORE THAN EVER

Posted by NCmountainwoman at 3:42 PM

Welcome back! I missed you and Lucy and the stories from your neck of the woods. Hope the surgery goes well. Thinking of you and sending best wishes.

Bless you, you are one busy gal. Take care of yourself, and remember, just do what you HAVE to do...have some time to rest for yourself, okay?
Good luck with the surgery for the bionic man. x

It's like a breath of fresh air to see Lucy again. I'm so glad you are back ... for as much or little as you want to post. Give Lucy a hug from me.

Be safe. Best wishes to your hubby.
I'm also taking a news junkie hiatus. Hopefully a maximum of only four years...:)

Welcome back!! I was getting ready to pay the ransom:)) Seriously you have been missed and so has Lucy. I really enjoyed getting my Lucy fix with her doing zoomies. That was adorable.
Hope the surgery goes swimmingly and the ten million dollar bionic fellow is frisky soon.

I'm so glad that you're back, although I am sad to hear that your injured player is injured again. I hope that the surgery can solve things completely.

What wonderful neighbors! We've had similar things happen when we've been sick or injured, except that driveways are very long around here... so our help comes in the form of a neighbor in a pickup with a plow. Good neighbors are a true blessing.

That's a wonderful photo of Lucy zooming!!!!! She looks like a puppy!

I'm sad to say that I just get more sucked into the news the worse things become. I need to try to break the addiction but I love my NYTimes.

Thanks for checking in!

Welcome back to my readership world. So glad to know how things have been with you lately...though of course it's not all been a bed of roses for any of us. Having a working computer does help, not to mention wonderful pets. May the bionic man's transformation be easy on him and solve all problems. I was part of a women's march today, which reaffirmed my belief in other people, especially my neighbors in our community.

Welcome back. Best wishes to you as you manage everything in front of you at present. Cut the Small Stuff loose and don't be afraid to Ask For Help.

(Trust me: I know how hard it is to follow that advice, but it saved my life once.)

I miss the mountains. I so 'get' your shoveling experience!!!

Love the zoomies! And all good wishes to the injured player.

Woo hoo! So glad you're back in the land of the interwebs. I hope the injured player is soon on his way to good health - maybe in time for spring training?

What a wonderful thing.....good neighbours are a blessing.
I love the image of Lucy, she seems to be having such a fun time.

The news gets worse understand you trying to avoid it.

Have a good week.

What lovely neighbors you have. A reminder of how good people can be. And aint it fun to be working shoulder to shoulder and having a good laugh?

Good to see you back. Best of luck with with all the medical stuff -- oy! We are getting older, aren't we?!

Welcome back, although it does sound like you will be very busy tending to all the things in the household and an injured player as well. Hope that there will be some good news for you both in this New Year. And, there is truly nothing like good neighbors!

Welcome back ... so lovely to see that photo of Lucy.

It is simply wonderful to have good neighbours for help and support.

Good luck to the bionic man for the up-coming surgery.
My good wishes

I miss the photos of Lucy. Hope all is OK and that you are enjoying the early summer. Can't imagine how hot it will be soon !