Sometimes It's Just the Right Thing


I have a good friend who gets very frustrated when she can't immediately recall every little detail of something or the name of a book or movie or some other relatively un-important fact.  I try to console her that all of us begin to lose our instant recall as we age and that it doesn't mean anything except that we are getting older.

My friend developed a couple of "memory recall tests" and when she can't remember something or a word does not come immediately to mind, she uses one of the tests to make certain her mind is still functioning well.  Never a fan of the BeeGees, she decided to use the four first names of the Gibb brothers as one of her memory tests.  An especially good example since only three of them were part of the singing group.

It is of note that this friend is a crossword puzzle expert.  She does several complex puzzles every morning with her first cup of coffee.  She subscribes to the weekend NY Times in order to do the crosswords.  (She says the Monday through Thursday ones are too simple.)  BTW:  she does them in ink, not pencil.

The last time my daughter visited, she and I were laughing at the friend's latest lament.  She had forgotten the name of one of our old bosses.  About ten minutes after the call, she called again to tell me the name.  My daughter and I decided it would be fun to provide her with a visual of one of her memory tests.  The two of us thought about a cross-stitch piece since my daughter is quite skilled at this.  We thought first of little bees surrounding the names.  Then we thought of a finger with a knot tied around it.  Finally my daughter thought of making a crossword puzzle.  She scribbled the names and realized there were several ways to make them intersect.  So the design was born.  Perfect for a crossword junkie.

My daughter did the cross-stitch and I had it framed.  The color in the photograph is not true.  The matting is actually more of a newspaper gray.  Incidentally, the white border is part of the canvas.  The framer was blown away by how perfectly square it was. 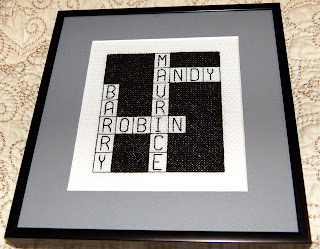 It was not my friend's birthday or any special occasion when I mailed it to her.  I did not even tell her something was coming.

It was a total surprise, made even more fun because her daughter was visiting at the time and had no idea what on earth it meant.  My friend was delighted.  Sometimes the smallest things can mean the most to your friends.  The crossword is hanging in her kitchen and she delights in telling visitors where it came from and what it means.

Special thanks to my daughter, my frequent partner in schemes for helping me give the perfect gift.


Posted by NCmountainwoman at 10:01 AM

That is the best gift. So thoughtful and very cool. You and your daughter did a wonderful, loving thing. I have to admit one of my favorite parts is that my name is in it! LOL!

perfect gift! I bet it makes her smile every day. Well done, you two. How nice to have such a creative partner in crime.

Seems your daughter fell close to the tree. What a neat gift, one that took thought plus implementing. Well done.

That is a perfect and very fun gift. I'm so glad that you and your daughter could do it together!

That is so wonderfully clever! What a team you two are!

Too bad your friend and I can't share a NYT subscription. I rarely finish any of the Friday-Sunday puzzles.

How great is that! She is very fortunate to have such caring and thoughtful friends.

What a fabulous gift! You guys are very creative & your daughter is really talented. I used to cross stitch, but those little squares are so tiny these days :)

Very nice gesture, Carolyn. I've gone through my own sets of reassurances here but unfortunately after several years of that Mayo diagnosed MCI with is I think there euphanism for the early stage of something more serious. Now I learning about caretaking...

I just love this.....what a wonderful gift. So personal and creative.

My mother is a crossword addict.....at 88 she completes a crossword every morning ........she never gives up until it is finished.

As a crossword fan I think it is a perfect gift. Very clever.