A Fireplace That Heats the Room


When we built our mountain home, we wanted a wood-burning fireplace.  We paid quite a bit extra for a fireplace that would burn wood, especially considering the fact that the chimney would be almost two stories tall.  We gave the height and width of the desired fireplace to our contractor, assuming (and NEVER assume) that the depth of a fireplace was standard.


It is a very tall chimney 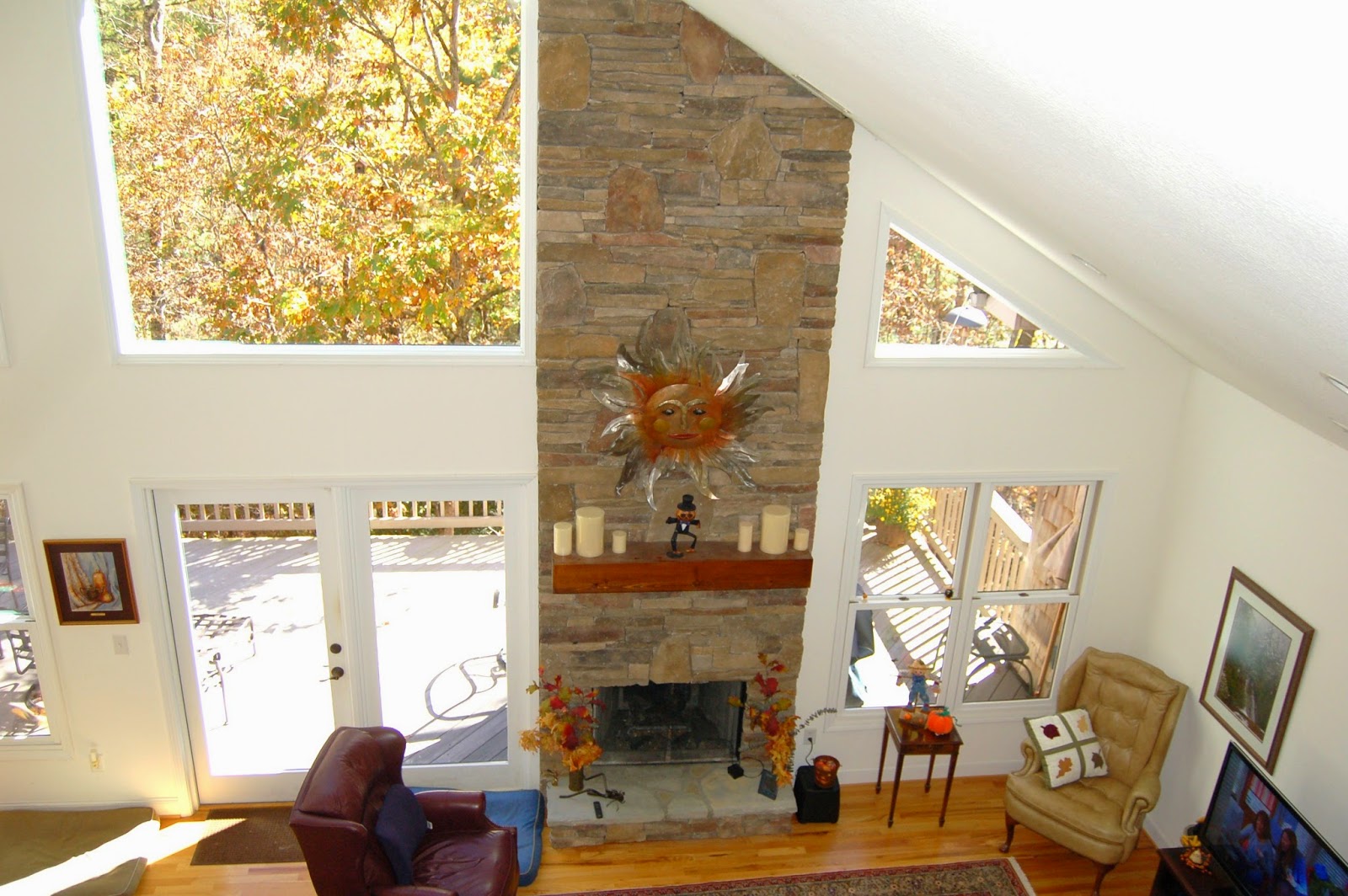 So we did get a wood-burning fireplace but despite a very deep chimney box, the fireplace itself was almost as shallow as the condo-sized fireplaces designed to burn logs from the grocery store.  We were disappointed to say the least, but decided to install gas logs so we would have a fire.  The fireplace was beautiful and the fire was beautiful, but it gave us no warmth at all.  All the heat was pulled up the tall chimney.


In mid-October, I read Betsy's blog.  (here)   Betsy is a dyed-in-the-wool lover of wood-burning fireplaces.  Yet she described a gas log insert that actually warmed the room.  I showed the post to my husband and we began researching these new types of vented gas logs.


Before the construction began 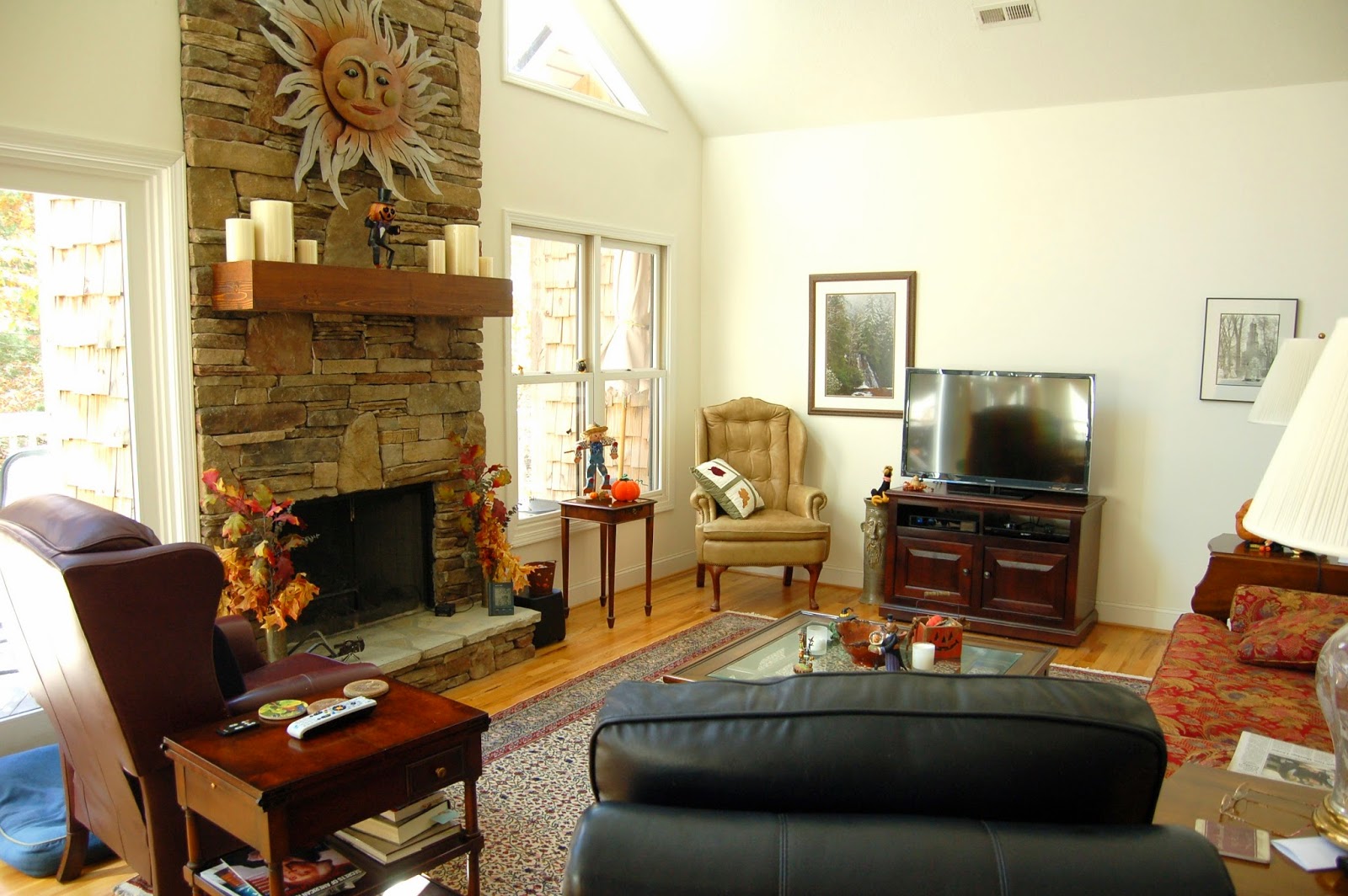 We visited a fireplace and hearth showroom and talked with the owner.  He was delighted that I had several pictures of the fireplace on my iPod.  We decided on a unit made by Mendota.  After some discussion, the owner gave us a "ballpark" figure for removing the old insert and replacing it with the new unit.  I gulped audibly but my husband said, "great."  So the owner came to our house for a home evaluation.  Imagine our surprise when he said they could begin installation in mid-November and we would have the new fire for Thanksgiving.

The work was more extensive than I had imagined.  They cut a large hole in the chimney and did a lot of the work from the deck outside.  The weather was perfect, albeit a bit chilly, and the workers were precise.  They lettered and numbered each shingle as they removed it and stacked them in order so they could be replaced in exactly the same spot.

A couple of workers, one inside the firebox and one in the great room. 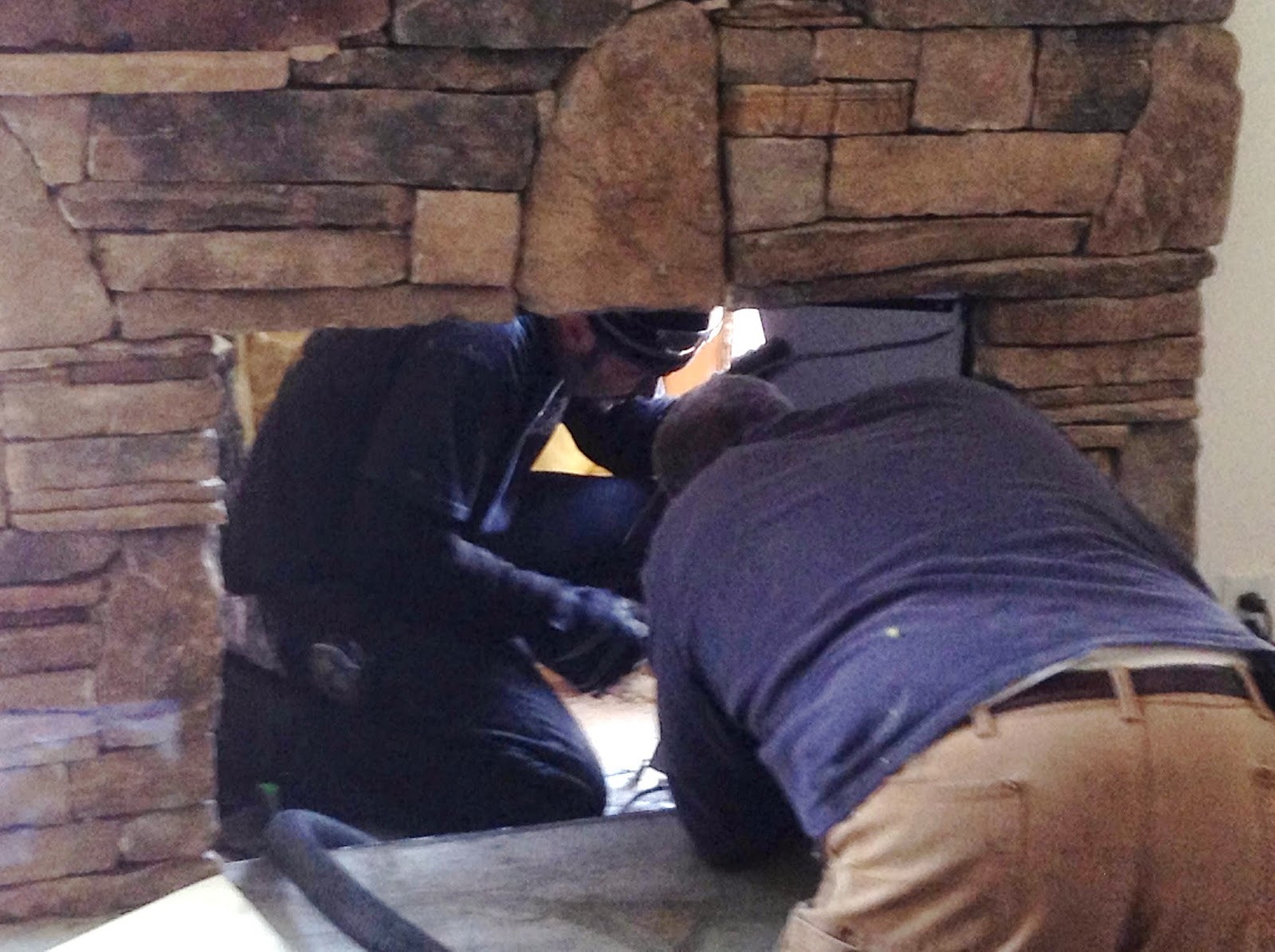 Looking through the firebox to the deck outside. 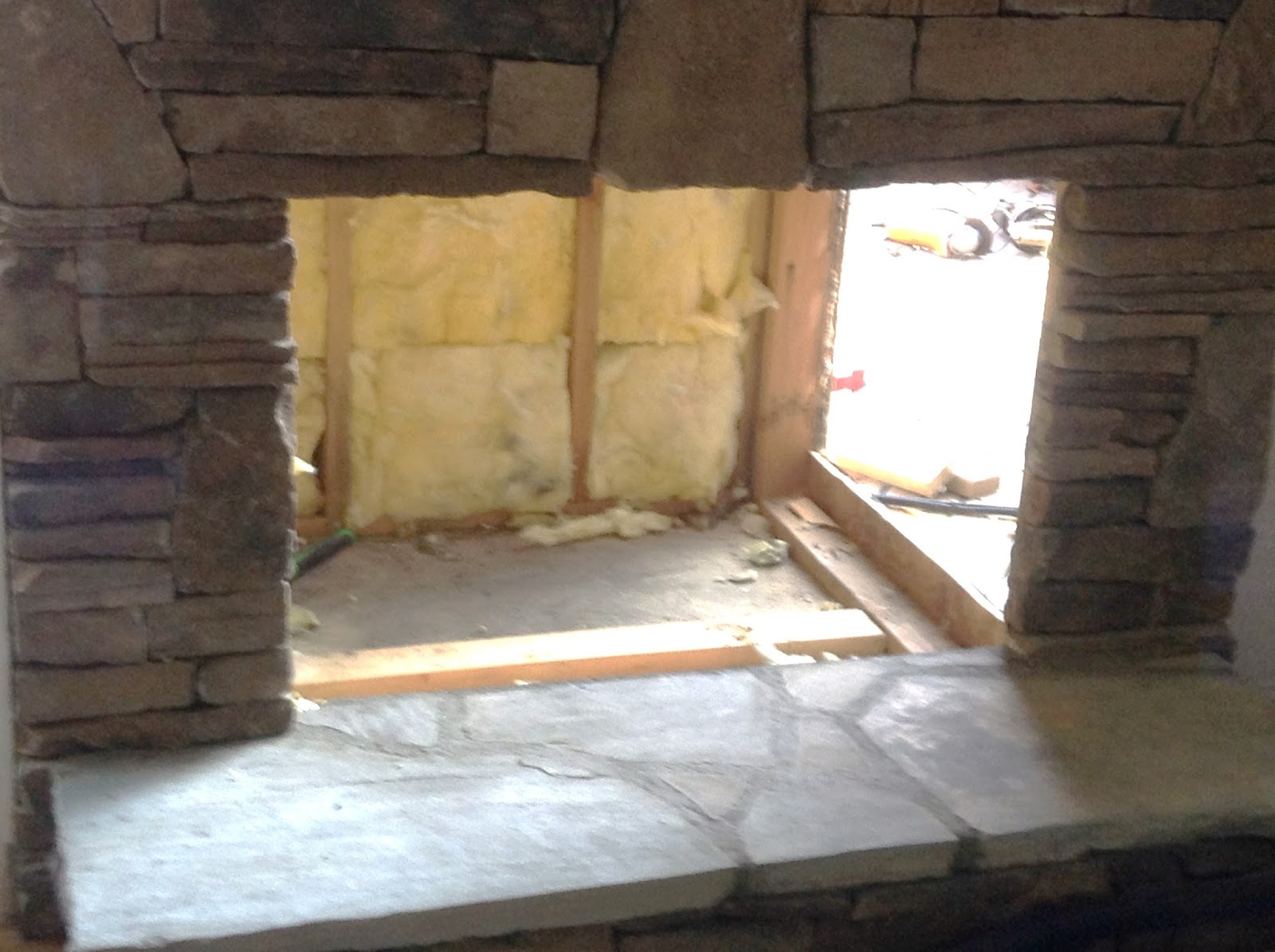 And looking through the hole from the outside to the floor of the room inside. 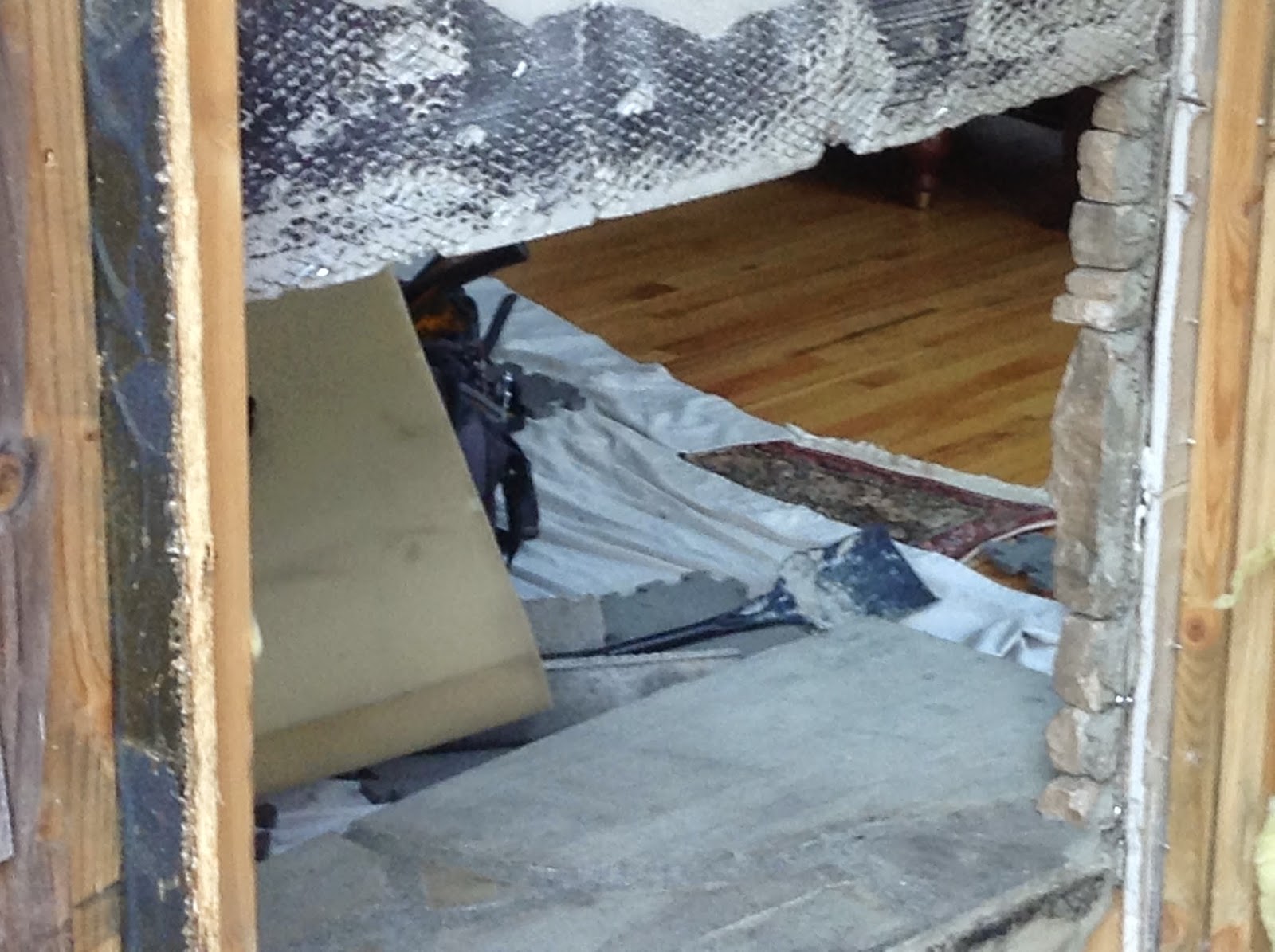 Each evening the workers carefully closed up the hole with insulation and plywood.  Despite some of the coldest weather we've had, our great room was actually warmer even with the cut.  That made us realize just how much heat had been sucked up the chimney, even when we didn't have a fire.

The next step would involve cutting through some of the stone (one-and-a-half inches on each side and three inches from the top).  While they made every attempt to keep the dust level down, it was still quite messy and I covered the furniture with sheets.  Cutting through stone inside a room is simply messy and there's no way around it.  After the tedious job of cutting the stone, it was time to place the new insert.  Next would come the electrician to wire for all the remote-controlled activity and the lights inside.  (Yes, the insert has lights that we can turn on to illuminate the logs when they are not burning, or even when they are.)  The gas line was already present but needed to be upgraded.  And then would come the tedious task of removing the hearth.


Posted by NCmountainwoman at 12:55 PM

I love my father's gas log fireplace. It's a simple but effective source of heat. He misses his wood stove, but this is much safer for him now...push-button fire and heat, as opposed to him hauling wood inside. Can't wait to see the "reveal" on yours!

My fireplace never seemed to work right, unless you were sitting on the hearth. Haven't used it in decades. Glad you are showing the course of your re-do! (although I'm not planning one for myself)

Sounds like a great project, and I'm sitting on the edge of my chair for the next installation installment.

Oh neat! I didn't realize there were options out there for that - my Mom was a teeny tiny wood fireplace that tends to not work well - I wonder if an insert would fix that?

We had an old insert taken out when we bought the house in Grass Valley, years ago. It really is a lot of work, but so important when you really want to generate heat. Looking forward to seeing the new installation.

I'm so happy that you're already reaping the benefits of this renovation. Your home is gorgeous!

It will be interesting to see the completed fireplace. So pleased you are happy with the choice you made.

I am so envious of your new fireplace.
I had a wood burner in Florida and you are right, even with the damper closed I lost some heat but also air conditioning. Today I would only want one like you have, especially with a remote.

I'm sure you'll enjoy it! Such a pleasure to watch the flames (and feel the heat!)

Sounds like a great improvement over all the heat going up the chimney. We had a Franklin Stove in our first houses basement. Mrs. T. didn't like the "dirty wood" that got hauled in so our new house is without. I still miss it and we even cooked with it...:)

oh boy...can't wait to see the final product! Amazing that the room was warmer while the work was going on. And yes, that is a mighty shallow firebox.

Our new house has a see-through fireplace, and we are having gas and fake logs installed in the next couple of weeks. I know it won't do much in terms of heat, but I look forward to hassle free fires at a moment's notice.

December greetings to you. We just had our gas fireplace(that wouldn't stay lit)tuned up this morning. It was dust that was hindering it. Now it seems like it puts out a lot more heat. So glad you got one that really warms your space.
Hugs,
Noreen

Can't wait for the next installment. That must have been a huge disappointment to find that the first fireplace wasn't as you wanted !

A big job but I'm so glad that you finally have a fireplace that heats your great room!

Thanks for your comments, everyone. We are so pleased with the new fireplace. No more wrapping up in a comforter with my morning coffee. Just grab the remote and turn on the fire.