Last week brought us some of the coldest weather we've had in quite a few years.  So what do we do when the weather changes?  Why we drive all over the place, of course to see the mountains a little differently.  Always changing and ever beautiful.


A couple of weeks ago I posted a photograph of Looking Glass Falls trimmed in a little ice. 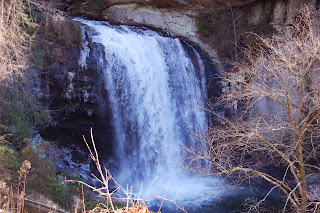 Now the falls are really iced and the surrounding trees are white  with frozen mist.  I have no doubt that the falls would be completely frozen were it not for the shelter of the granite cliff on one side. 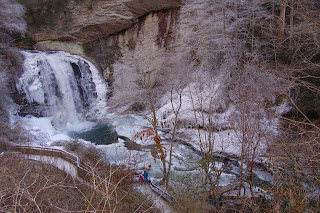 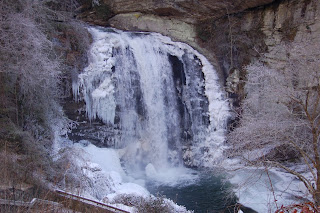 We built our house in 2005/2006 not long after three hurricanes flooded the mountains with rains.  When Ivan finally left, thousands were without electricity for several weeks.  So we had a generator installed.  A big generator that would power the entire house for two weeks.  Or even longer if we  really conserved and lived on one floor.  We don't often have power failures and when we do they are of short duration.  But having the generator gives us a lot of peace of mind.

The first time we had a power failure of any length was two years ago.  Over the Christmas holidays with guests here.  The power went off.  The generator did not kick in.  Seems the battery was dead.

Fast forward to last Tuesday.  Minus one degrees.  At 5:00 in the morning the power went off.  Ah...the generator started to hum.  Wait a minute!  Why isn't the power back on?  We called the service people and left a message.  So we sat in the house with the temperatures dropping inside while the generator happily ran outside, burning up propane but not giving us any power.  The repairman arrived around 10:30.  There was a "problem" with the relay strip that allowed the power generated to actually travel to the house.  Ironically enough, the power was restored while the repairman was here.  He showed my husband how to flip the strip manually if needed in the future.

So the final score?  Twice we have needed the generator.  And twice it has failed to deliver.
Posted by NCmountainwoman at 9:51 AM

Oh wow, that is a disappointing record on that generator. Sure hope it kicks in, if you ever need it again. Our new furnace broke during the west-coast arctic blast in early December. We had temps in the teens here, which is pretty cold for us. We have never been more grateful for a wood stove than we were during those five frigid days without a working furnace.

Well that bites! Hopefully it's figured out for the next time!

Oh my. I have a wry smile as it seems...that is how it goes! I am glad that you didn't get too terribly cold though! As you mentioned the temperature in your house dropping...I began to worry! It was a chilling -10 up here during the time I think you were talking about. When you click on your photos to enlarge them they are AMAZING!! Love-love the frosty trees near the waterfall. I agree with you here, too: "So what do we do when the weather changes? Why we drive all over the place, of course to see the mountains a little differently. " We do this too! :-) The mountains are always changing...:-)Hello from Boone tonight!

Oh i can't imagine what happens when generators broke down, or pipes stopped flowing for water. I can't relate to these because i havent' experienced winter, but i can relate cause even just looking at the frozen water really look very cold. Keep safe and take care!

Oh, dear. We do not have a generator and have talked about getting one. Your account gives me an extra dimension to consider--making sure the generator generates when called upon.
Here's hoping from here on out your generator does its thing when needed.

Your photos are fabulous. Flowing water is one of my favorite things, but when it freezes it's absolutely breathtaking! Knock on wood, we've yet to loose power this year. We don't have a generator, but we did install a wood stove for heating (we don't use the electric) so even if the power goes out, we can stay warm. I hope the next time you need your generator, it delivers!

Hope that the third time is a charm, if the generator is needed, and that it will work as expected. TGhe frozen waterfalls are beautiful and just this morning I watched a video of the falls frozen at Niagara Falls, where we must go one time in winter after seeing them this fall.

YAY! At least Blogger is letting you back into your own blog. Perhaps its generator failed, too. :)

The 60-degree temperature variations from week to week here have left my plants wondering what the heck is going on. The jonquils are up, but they can't remember why. No buds.

We don't have a generator, so when the power goes off here, there's nothing to do except dive under the covers and generate our own heat until Duke Energy makes repairs.

Well….all the best laid plans….yadda yadda.
I'm glad you won't have to worry in the future though.
Love seeing the iced over falls; gorgeous!