Another Pileated Woodpecker has fledged.  This makes the fourth from our two pairs of resident parents.  We saw the adults showing behavior that suggested they were feeding a fledgling deeper in the woods.  Finally, they brought her to a tree near the house.

The other day my husband came inside from sitting on the deck to tell me that I had missed the greatest photograph ever.  He saw the parent feeding the fledgling on a branch and he knows how badly I have wanted to catch the moment with the camera.  "The lighting was just perfect!" he said, "it would have been great."  I snarked that I had a bigillion such missed opportunities on a weekly basis.  You know all of them;  you don't have the camera with you, the camera has the wrong lens on it, etc., etc., etc.

But I knew that sooner or later I would see the feeding and have my camera at the ready.  Not on a branch, not in perfect light, but at least on the right side of the tree.  [NOTE:  For some reason, the photographs look very dark if you have your laptop tilted too far so you might have to adjust it.]

The little girl waits on the tree. 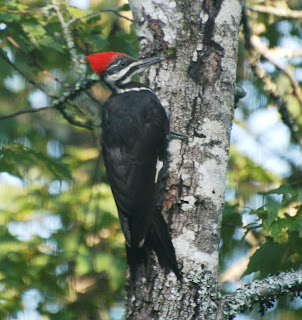 Her mother comes back from the suet and lands alongside. 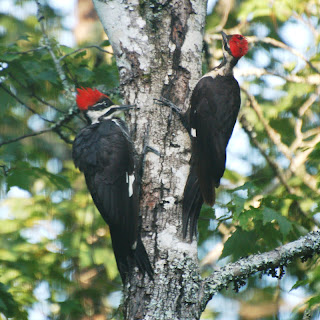 Finally!  They do not go up under the leaves or crawl behind the tree.
They actually feed right before my eyes. 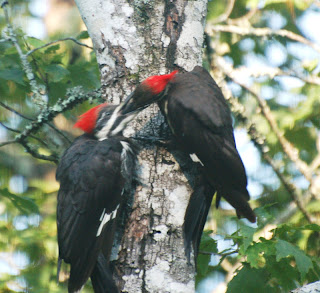 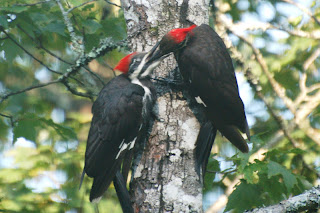 And then they break apart.  Notice that there is little size difference between the adult and the juvenile. 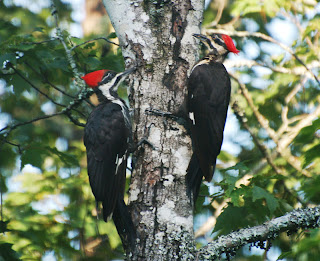 The mother turns her head.  Perhaps there have been too many camera clicks.
Together they fly off deep into the woods. 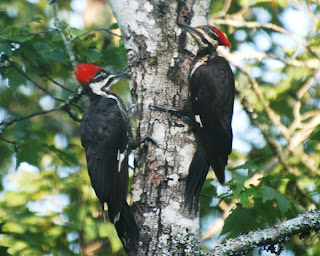 If you are reading this, I assume you still have Internet access after the Feds shut down the temporary fix for the "Doomsday" virus causing thousands of infected computers to be unable to connect to the Internet.  It is frightening to think of the horrid things evil people can do to so many people in our electronic world, isn't it?

I hope your week is starting well.  Temperatures across the mid-west and eastern US are expected to moderate a bit.  And we hope for the rain to stop in the UK and Russia.  We definitely have some global "weirding" going on.

Posted by NCmountainwoman at 10:09 AM

These are wonderful pictures...very professional. I enjoy them a lot.

Your perseverance paid off! Such wonderful photos. What a fantastic sight.

Great shots! This is my favorite woodpecker, as you probably know already.

I'm glad Mama and Baby Pileated cooperated and let you get pictures. It's always fascinating to watch the care the parents give their fledglings.

I thought of you today when I juvenile and parent visited the old apple tree. Of course, like you say I did not have my camera with me.

I love your images....it is wonderful to see parent and juvenile feed. They are lovely woodpeckers, I love the red crown.

Glad to hear that you should get back to near normal temperatures for the time of year.
We are expecting rain on and off all week....I think I am growing webbed feet :)

I could hardly tell Mom from child here. Congrats on the wonderful capture; nature is wondrous!!
I often think that if those 'evil' people used their powers for good...what a great addition they could be to the world!

We are not so fortunate to see many woodpeckers, so thanks for this show and tell of a very colorful pair. Yesterday we saw some baby starlings, which are among my least favorite bird.

Pileated woodpeckers are so special. What wonderful photos of mom and fledgling!

I'm surprised you were able to get them in focus... from all the jumping up and down you must have been doing! Good job!

Those are awesome pictures. Until I saw them feeding, I would have thought them both adults.
I really miss the Pileateds. Used to see a bunch in Florida, none here.
Hope is here. We have had three good rains and temps are MUCH cooler. Amen.

Great Pileated shots! They always seem to go around to the other side of the tree for me. Maybe I make too much noise?

Wonderful shots of this gorgeous bird! Haven't seen the ones in our woods lately...hmmm.
I do know what you mean about missed opportunities. Oldest daughter got here late last night, only had my cell phone in my pocket as we helped unload. There, on the base of the garage door was a giant orange moth! A Royal Walnut Moth. Crappy pictures, but did have a couple.

fabulous images -- lucky you they stuck around in full view for awhile. Great to see!

Gorgeous photos - Lucky you!! Lucky birds to be living on your property where suet is plentiful too!

What a great opportunity for a great series of photos!

Doomsday virus? I am so out of the loop!

Thanks for your comments, everyone. We do love our woodpeckers and are fortunate to have four different types who come to our feeders on a regular basis.

Lucky (or is it persistent) you! I've only seen a pileated woodpecker once in person and it was so amazing how big they are!