Remember when you first learned to make animal shadows by shaping your hands on front of a light?  I wasn't very good at it, so a rabbit and a dog were about all I could do.  My favorite practice time was during church.  When I was kneeling and trying to look reverent, I was actually making shadow animals on the pew in front of me.

In nearby Jackson County, Nature makes her own shadow puppet for a brief time every fall.  On clear evenings, from mid-October through early November there is a remarkable shadow across the mountains between 5:30 and 6:00.  As the sun is creeping across Whiteside Mountain (here) near Cashiers it casts an amazing shadow on the nearby mountains.  Called the "Shadow of the Bear," the form looks just like a bear ready to go into hibernation.  I have never driven over to see the shadow in person, but I am totally awed by the photographs.

This photograph from the Transylvania Times - Jerry Jaynes 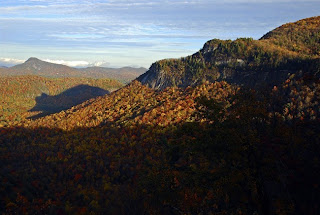 This photograph from the Asheville Citizen-Times 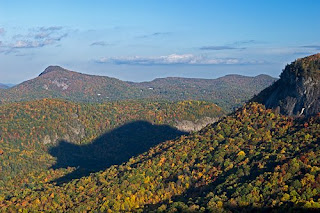 What an amazing sight.  We've often driven by this very site but never at the right time to see the shadow.  Someone asked if I thought the mountaintop would look like a bear if viewed from the shadow itself.  I suspect the mountaintop would no more resemble a bear than my hands would resemble the rabbits I made in church.  And that's what adds to the magic.
Posted by NCmountainwoman at 10:37 AM

truly an amazing. Nature speaks in wonderful languages through many signs and symbols. But, we rarely perceive the message hidden. Thanks for sharing.

great photos of this shadow.

I also love making shadow puppets on my wall, but this one on a grand scale has gone mine beat by miles!

I have never been down to see that either, but it is fascinating how the shadows work.

Love these pics and can picture your looking reverent in church:)Been there.

How very cool! I remember making shadow puppets on the wall when I was little. Like you, Carolyn, I was never very good at it! Neat post.

I love this!!! Thank you so much for sharing...brought a big smile to my face.

That's amazing! I'd love to see it.

How terrific! Thanks for telling us about this!

Fascinating!! I'm going to have to start paying more attention to shadows.

I love your analogy, Carolyn, and I believe that you're right about not seeing the shadow form in the mountain itself. Were you the little girl next to me in church? I think maybe I learned to make a rabbit by watching you!

I absolutely cannot visualize you making shadow puppets while kneeling in church! I'm chuckling at the thought!

That shadow does look just like a bear. I love it!

That is so awesome - I really would love to see that in person.

That is so amazing. At first glance at the photo, I thought it was a mouse. hahaha. I totally see the bear now.

Apparently, there are parts of the mountains I have yet to see.

Wow! This is fantastic. What a wonderful for the mountain to cast a shadow like a bear. I sure liked this posting. I also recall as a child making shadows on the wall like a rabbit. This brought back good memories. Have a lovley fall day.

Interesting that the shadow is of a bear. Actually, I live on a mountain called Bear Mountain. Fun stuff -- barbara