We may be close to Heaven, but the Devil is here too

For those of us who live here, the NC mountains are close to heaven. We often stand in complete awe of the majesty here. In all seasons the mountains touch our lives and uplift our spirits.

However, there are many places in our mountains where the Devil himself makes his presence known. One such place is a rock formation in Chimney Rock State Park.

As you climb above Chimney Rock itself, the formation comes into view. 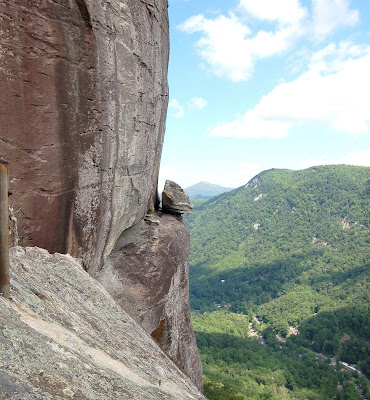 A closer look gives the details of the Devil's face, looking out over the mountain. 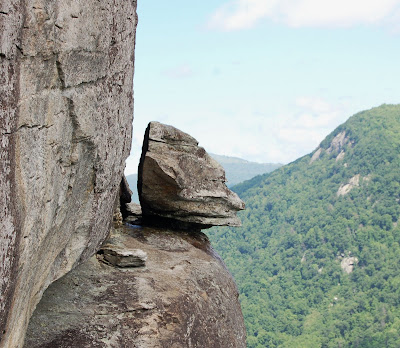 Folklore tells us that the Devil is there to remind us of his continuing presence and influence in our lives. Geologists tell a slightly different story. They say the rock is part of a very large rock slide with this boulder landing on the ledge. Because of the nature of the rock, some areas eroded away, leaving the outline of the head and facial features.

The Blue Ridge Parkway passes around another famous rock formation known as the Devil's Courthouse. Folklore tells us that the devil held court there. 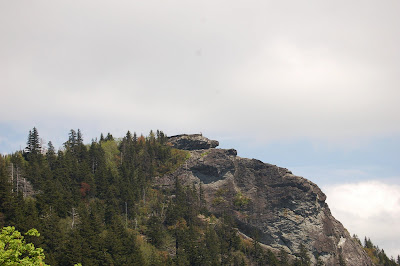 Cherokee legend tells us that a huge giant named Tsul'kalu' used a cave within this mountain for a ballroom and danced there. The slanty-eyed giant who stepped across the mountains, scratching and carving the stones, is now called Judaculla. (Like so many other names, settlers felt the need to make Cherokee and other Native American names easier to pronounce.) 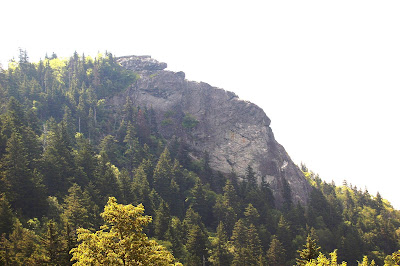 I understand the scientific explanations for our rock formations. And yet there is a part of me that clings to the legends. Don't get me started on the Indian princess(es) who leapt from the waterfall(s).

Posted by NCmountainwoman at 8:52 AM

Fascinating rock formations for sure, but I get jelly-legs just looking at the picture and imagining myself standing there, lol!

I always love seeing your photos of the NC mountains. It's really so beautiful there.

I love folklore as well.
The devil face scares me a bit though.

Science is helpful, but legends let our imaginations and creativity run wild.

When we lived in Alaska, I couldn't get enough of the folklore and stories--They touch a part of my soul and I find myself totally captivated and connected to those legends--Science just doesn't do that, at least not for me! :-)

I love the old legends also, Carolyn, and I love all of the rock formations in your mountains. And--I do know of a couple of legends where the Indian Princess jumped over the waterfalls...

I thought at first when you mentioned the 'devil' and Chimney Rock, that you were going to talk about all of the tourist crap that we've turned beautiful things into. George and I were going to Chimney Rock late one afternoon and when we found out it would cost us about $28 or so---we turned around (since we didn't have much time).... Oh--tourism???? Drives me crazy sometimes--but I guess the county/state needs the money....???

I think the so-called devil rock is really a woodpecker -- after all your beautiful area is nature based. Folklore reflects culture. The words devil, heaven, and ballroom are European words -- not native American. Therefore, the folklore would have originated with white Euro settlers. Sometimes these folklore legends get a little skewed. Oh, the woodpecker rock is my version of its folklore. All just fun. Beautiful mountains -- barbara

I've been past the Devil's Courthouse several times, but I don't recall the devil at Chimney Rock. Scientific explanations are nice, but I prefer the legends.

And the view from the top of both is spectacular. We don't do the Courthouse very much in the summer (too crowded), but often will do that trail in late fall and early spring (winter can be treacherous). We hike down the mountain to sea trail and then cross over to the rock. The views are spectacular.

I love the legends, too!

Never could get the echo thing going for me though.

Very nice post. We have to pass the legends on to future generations or they will be lost.

I think both explanations have their place in our understanding. We interpret meanings and images from nature all the time -- it may have its geological basis, but our imagination takes hold nonetheless.

Embarrassing to say I've lived here in WNC for 35 years and never visited either.

Loe the legends though!

I think the legends lend a sense of wonder to an area. Boy, in Ireland they abound and just about every landmark has a legend attached to it!

It seems that every mountain area is full of places with the word "devil" in their names. I wonder why?

I love the juxtaposition of the geology and legend... Thanks!

It seems everywhere one goes across this great country some has decided to name places after the devil! Why does he get them all? There is Devil's Hopyard in CT and Devil's Thumb in Yellowstone NP. I know there are more but I can't think of them all right now!

What's truly amazing is what time has done to a mountain range (the Appalachians) that at one time, many geologists think was as lofty as the modern day Himalayas--30,000 feet.

Legends and folklore are always the most interesting. Sometimes science actually implements the legend - or can if you twist it a little!

I understand the science, too.
But I'm with you...I like listening to the legends.
They have a way of keeping us on the straight and narrow.