The Halloweenfest is the biggest festival in town. That shouldn't be much of a surprise. After all, we are the County Seat of Transylvania County.

Saturday morning was drizzly and damp, but that didn't mar the festivities. We drove down early to see all the crafts and listen to the music.

This is Main Street, and booths line both sides of the street, as well as the intersecting Broad Street. 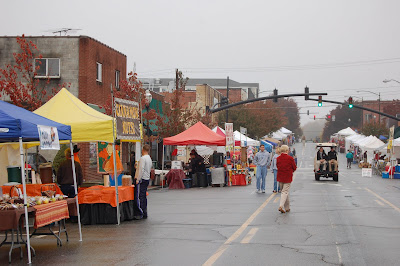 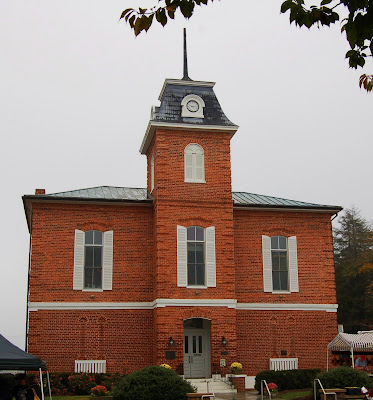 This is Courthouse Square. We have lived here two years and both my husband and I have been called for jury duty here at the Courthouse. 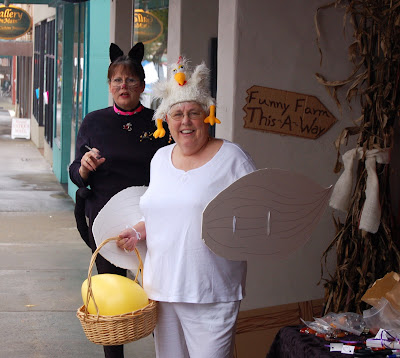 You don't believe cigarettes are addictive? Even the black cat has to take a smoke break. 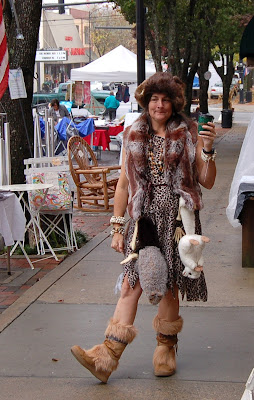 The owner of a shop called Hunters and Gatherers is dressed up for the occasion. She is dressed as a hunter, in case you didn't figure it out. 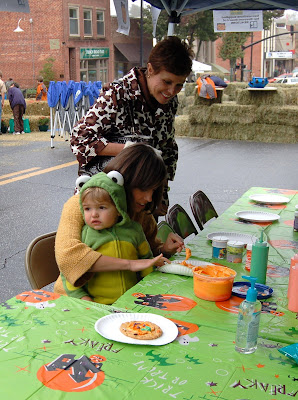 A local bakery had cookies for the children to decorate. Sometimes the parents were far more interested than the children. 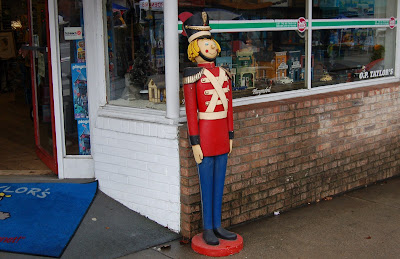 We have a very large (and very fun) toy store on the Square. O.P. Taylor's has anything you or your child could desire.

A glace at the political booths gives a lot of insight into the politics of Transylvania County. 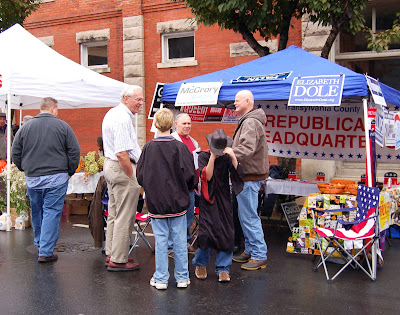 The Republican Headquarters was crowded with visitors all day. Interestingly enough, far more of the advertising was for govenor and Senator, with little mention of the Presidential race. 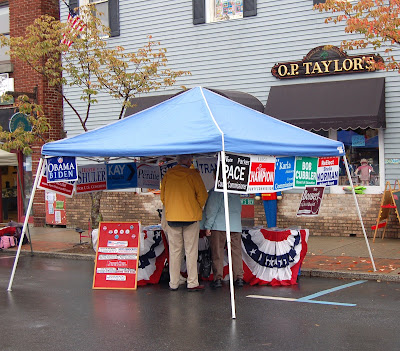 The Democratic Headquarters had far fewer visitors.
The two booths were directly across the street from one another. I was very pleased to see that there was no shouting, or disruptive behavior from the visitors to either booth. 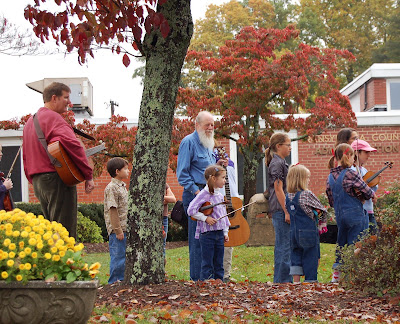 Children lined up for the Old Time Fiddler's Contest on the Courthouse Square. 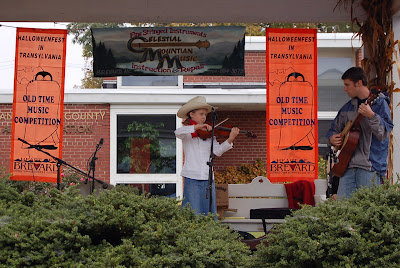 This little girl (who looked to be about seven) played a rousing "Orange Blossom Special" much to the delight of the crowds gathered to listen. 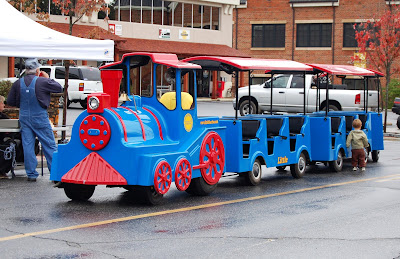 The "Little Blue Choo-Choo" gave rides through the streets. Here the engineer takes a little coffee break while an interested youngster checks out the train.
We did not stay around for the biggest event...the costume contest and parade. Last year there were 400 children who marched in the parade. We had a lot of fun and bought a beautiful bowl made from a cherry burl. We enjoyed chatting with the folks who were there and watching the children having so much fun. Just as we were leaving, the sun burst through the clouds and the day was perfect. We were glad the weather changed so the children could enjoy all the free activities planned for them. There are so many joys in living in a small town.
Posted by NCmountainwoman at 10:26 AM

Looks like a fun festival. I do like the picture of the mother and disinterested child with the cookies. How typical! How many people do you vote for on your ballots?

The weather does look a little drear ... good you had some fun things to do and see to compensate!

I miss a small town, having grown up in one, and spending the first part of my married life in another. The suburbs don't quite compare.

How fun! Sam would have been enthralled by the train. :c)

That looks like so much fun! Another reason that this is my favorite season! (I wonder if they would let me decorate a cookie! Mmmm...)

Ruth - The ballots contain all the candidates, both partisan and non-partisan. One can vote a "straight" Democratic or Republican ticket, but still must individually select candidates for President and for the non-partisan candidates.

Cheryl - It is a great little town filled with friendly people of all types.

Cicero - The weather was a bit dreary, except that we needed the rain so badly, no one minded.

Jan - I totally agree. We lived in typical suburbia for many years and are delighted to be back in a small town.

Helen - It really was. Just watching the children and their parents was a delight.

Jayne - The train was a popular item. In fact, there were more older people on the train than children.

Dog geek - I'll just be they would have let you decorate a cookie. Being a child is all a state of mind around here.

I guess no one can escape the political stuff right now; otherwise, that looks like fun! Your narrative made me laugh all though. I was wondering what county you live in.