How is it possible that the first month of 2016 is ending already?  It seems such a short while since the holidays.

Lucy doesn't seem to notice the passing time.  For her the days are measured by her routine activities.  Go outside first thing, eat breakfast, play for a while, then take a trip to the park to romp and play.  The rest of the day is spent snoozing with short periods of active play and the necessary trips outside.

Lucy has several places she chooses to snooze.  She snoozes more often than not in one of the several beds in the house.  There are two in the great room, there is one in my husband's study, and there are two in the den.  We still have Ellie's bed lying next to Lucy's.  Her crate is still set up in the doggy room and her food/water dishes remain in place.  While Lucy never goes inside Ellie's crate, she does drink from the water dish and sleep in the various beds.

Here she is in her own bed.  Like most dogs, she has a variety of sleeping postures.
Her favorite blue tug lies nearby. 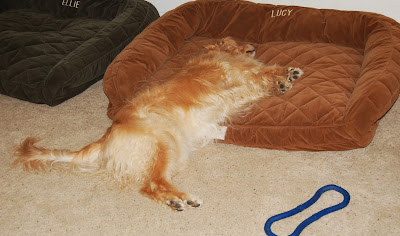 Other times she sleeps in Ellie's bed.
(You'll have to ask my husband why we bothered to have the beds personalized.) 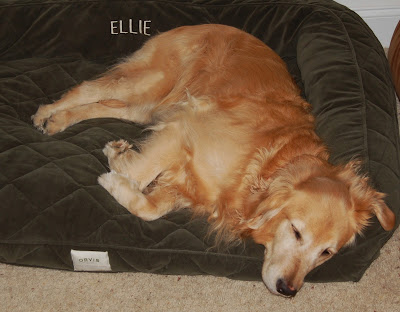 In spite of several days of temperatures well above freezing and a bit of rain, we still have a fair amount of icy snow on the ground.  However, all the roads are clear except for the non-paved ones and life is pretty much back to normal.  My mother used to say that when the snow continues to lie around, it's because there will be another one soon.  I'm hoping that is not true; that it's because the snow was so deep.

Still enough snow to do some tracking if you've a mind to. 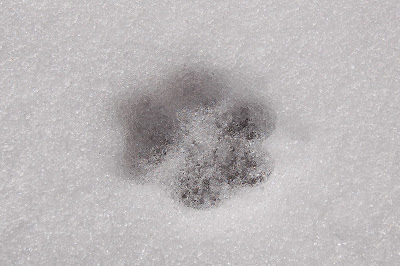 I will not wax political today except to leave you with this quote.  It's from Minnesota politician Walter H. Judd who worried about voter turnout in the early twentieth century:


HAVE A MOST WONDERFUL WEEKEND!

Posted by NCmountainwoman at 12:28 PM

Always good to Lucy so comfortable on her big cushy beds. She's really such a beautiful doggie. Hope your weather warms up enough to melt all the ice and that there is no more crazy snow storms on the horizon. Here, it's rain rain and more rain. Great quote.

I love how Lucy just sleeps where she will - sometimes I wish I could do that!

I was reading a post on Facebook about the presidential options & several people commented that they never vote. Sigh.

Tell you what, that gal has a super life. Loved the half in the bed position.
The quote is spot on. I will not listen to people gripe who never vote. What are they thinking??

I like the quote. It always amazes me after elections when people complain and then you find out they didn't even vote. Have a nice weekend.

I often see Lucy and wonder how much she misses Ellie.

We will probably be turning on the AC this weekend, if you can believe that.

Lucy sure is a beautiful dog. Sounds like she's living a good life!

I always vote, but don't comment on politics. It's a subject that is very debatable.

Hi there, So glad that Lucy has so many comfortable places to sleep. Hunter has three beds-one in our room, that he hardly ever uses, one downstairs near the t.v., one in my sewing room. Generally he uses the one in the sewing room the most, when I am in there. All three beds were from our last two dogs. It will be interesting when our daughter gets their Standard Poodle to see which one she likes the most. Due to the size, the poodle will not be allowed on any furniture or beds. We will honor those wishes when she is with us. It will also be interesting to see if either Hunter or Lily want to sleep with her.
We are awaiting a big snow storm tonight through Tuesday-ugh, I'm ready for spring, but that is still 4 mos off.
Hugs,
Noreen

What a good life your Lucy has. She looks utterly content which makes me smile.

Have no fear, I plan to make my voice heard! I am always sad when I see the turn-out numbers and even sadder when laws are passed that make it harder for people to vote.

Robin-I hope you are right. But our biggest snowfall is often in early March. Hope the sun finds you soon.

Bug - Sometimes it makes me angry that a dog could possibly look so comfortable. But she does look comfortable no matter where she is.

Ginnie - Me too. And the ones who didn't vote are always the first to complain.

Ms. A - I don't think she really does. The Dog Whisperer tells us dogs live in the moment and that's what I choose to believe.

Brenda Kay - Oh, I wish I could be more like that. And actually I am in company. I rant only on my blog and to my family. In this conservative hotbed where I live, I dare not mention politics.

Noreen - Should be a fun time with all the dogs.

KB - Our own newly-passed voter laws are working through the court system. So unfair to disenfranchise so many people.

It is kinda funny that the dog beds have their names on them.....perhaps your girls could both read? I'm such a fan of Lucy's daily schedule; it would work for me as well. Stay warm.

I'm only just catching up with reading and visiting blogs ... I don't know where January went, but I have been fortunate to spend a little time with family, which is always lovely. However, I just had to come and see Lucy.