Water Over the Falls

Last week I mentioned the tremendous amount of rain we had in a very short time.  That, along with warmer temperatures and melting snow led to swollen rivers and flooding all over the county and in several neighboring counties as well.

Much as I wanted to drive out to see the waterfalls, I wisely heeded the advice of officials and stayed home.  Fortunately our local newspaper published a photograph that shows just how much water filled the rivers and overflowed the falls.

The first photograph was taken by me in 2008.  The popular waterfall is Looking Glass Falls located in our county.  The name "Looking Glass" comes from its proximity to Looking Glass Rock, a granite monolith rising in the mountains nearby.  The sides of the sheer rock faces reflect sunlight like a mirror when water or ice forms on its sides; thus the name Looking Glass Rock.

Looking Glass Falls is the most easily accessible waterfall in western NC. One need only to park in a space near the falls and walk on the sidewalk to view the waterfall.  There are steps going down to the base of the falls.  With its sixty-foot plunge, Looking Glass is one of our most majestic waterfalls and is located in Pisgah National Forest.


The normal fall from this plunge-type waterfall
Notice how placid the water is at the base of the falls. 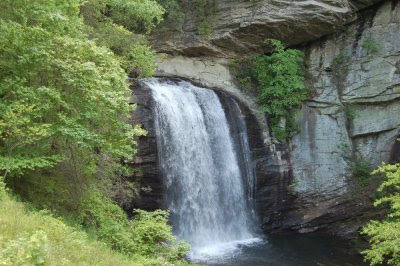 The following photograph was taken on February 2nd or 3rd after the heavy rains and melted snow.  Notice the railing in the lower left of the photograph.  The landing at the base of the falls is underwater.  Only the top railing is visible. 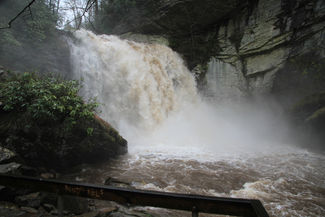 One wonders just how much more water is falling over the waterfall and in the river below.  On summer days people wade in the area at the base.  The water that was there when this photograph was taken would surely have made it impossible to stand against the powerful current.

Quite a wonder to behold.


Posted by NCmountainwoman at 1:48 PM

I'm glad you didn't go to the falls and take pictures yourself...goodness, so much power! But the normal Looking Glass Falls is one I love to take visitors to see if we have time, the drive is about an hour from where I live. In the summer I love to keep going up to the Pisgah Inn for a meal, which I know you also visit.

That is a lot of water! Love the comparison photos. Looks like a wonderful place to visit.

Water falls are like camp fires to me. I can space out and watch them for hours. I use to live on the lower of two lakes and our home faced the falls between the lakes. That second picture brought back memories.

What a difference!!! I am an admirer of well, the trickling waterfalls. The powerful ones are best admired from a considerable distance in my estimation. :) My Dearly Beloved says that he loves to come across waterfalls when he's hiking in the mountains. I hope they're trickles.

Stay safe up there!

I think you were wise not to venture out.
These two photo's are both awesome, I love waterfalls.
That second photo really shows the power of nature.

Have a good Friday and a Happy Weekend

WOW! Quite a difference in those two photos. Good you did heed the advice.
But, thanks for sharing the "borrowed" photo.

Barbara - We also take visitors there. But first we take them to Connestee Falls which is just outside our gate.

Robin - We have so many beautiful waterfalls in our country. This one is the easiest to visit by far.

Janet - Thanks for dropping by. I'm a constant lurker on your blog. Congrats on the cookie cutters.

Jan - The waterfalls are indeed forceful and lovely.

Donna - I really, really wanted to get up there and take the photographs myself. I knew the flow would be more forceful than I'd ever witnessed.

you should have seen my face when I saw the second photo! Like that kid in "Home Alone."

we often forget how powerful the force of water is. often at our peril. glad you stayed home, and safe!

Those are incredible comparison photos. I love how Mother Nature is one force that we humans haven't been able to tame. I love the power and the energy of that waterfall! It must be a wonderful place to visit in the summer.