Things were a bit different for our family when we first moved to Wisconsin.  Our children learned very quickly that manners were less important there.  Loud laughter filled the classroom when my son promptly stood and said, "yes ma'am?" when the teacher called his name.  Children were on a first name basis with parents of their friends.  The water fountain was called a "bubbler."  And so many little things, unimportant to adults but crucial to a middle school child.  But being adaptable kids, my children soon learned the ways of the region.  But they still had to say "please" and "thank you," "yes ma'am" and "yes sir."  I insisted on that.

My husband and I learned new things as well.  That hardly any restaurant served grits for breakfast. That people ate more brats than hot dogs.  That every bar and most restaurants had a fish fry every Friday.  That a popular Milwaukee appetizer at parties was called a "cannibal."  Made with raw freshly ground steak mixed with raw egg, it was served with onions, capers and seasonings and served on rye bread.  BTW:  there were at least three major e. coli outbreaks linked to eating cannibals while we lived there.  And no, I never once wanted to try one although they were often served at parties we attended.  That the break rooms at work were often filled with hard rolls and butter.

And in February the office was abuzz with everyone talking about punch key [sic] day.  Folks looked rather amazed when I asked what on earth punch key day was.

It seems that the word that sounds like punch key or pontch-ki is actually the Polish word "paczki."  I always thought of myself as well-read but somehow I had never encountered that word.  But you won't live in Milwaukee during February without learning all about pacskis.  They are heavy, luscious, deep-fried pastries,  usually filled with a jam and/or custard filling.  Glazed with icing or powdered sugar they often are decorated with orange zest.  Paczkis look like filled doughnuts but are made with a much richer dough.  They are a special treat on Shrove Tuesday, the Tuesday preceding Ash Wednesday.

They originated in Poland in the Middle Ages and became a popular way for Christians to use up their remaining sugar, lard, and fruit, all of which were forbidden during the Lenten season.  Unlike many metropolitan areas, Milwaukee still has large numbers of small local bakeries, especially on the South Side.  The bakeries opened no later than six on Shrove Tuesday (some as early as 4:30) to allow workers to purchase paczkis to take to work.  So people in the office would pick up a dozen of them (plural is pronounced "poonch-ki"), filled with their favorite jellies and bring them to work.  The tables were laden with these delicacies on Paczki Day, otherwise known as Shrove Tuesday, Mardi Gras, or Fat Tuesday. 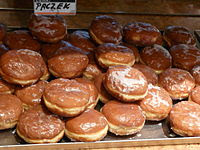 Fat Tuesday is appropriate for the folks who overindulge in paczkis.  The average filled paczki has about seven hundred calories and 50 grams of fat.  The most popular filling is prune.  Fortunately I never cared much for them so they were easy to resist.  But I have seen people eat three of them at a time.  I have no idea how that would sit like a heavy burden in one's stomach.  I fear no amount of coffee would keep me awake after eating even one paczki.

I must admit, it was such fun to learn the regional differences between the South and the Mid-West.  And Milwaukee was such an ethnically diverse city, one could find almost anything from any country.  It was a great place to live although I would not like the winters there as much as I did when I was younger.

[Non football fans, you don't need permission, but you might want to leave this post now if you wish:]

You will be pleased to know that despite the results of the Super Bowl yesterday, the sun did indeed rise over North Carolina this morning.  I was delighted with the game.  The sassy upstart was sacked six times, went 18 for 41, threw an interception, did not make a touchdown, and made two critical fumbles each of which led to a Bronco touchdown.  I was hoping he might learn a bit of humility after playing so poorly, but he once again showed his lack of maturity by walking out of the post-game press conference.  A reported asked about his disappointment with the outcome.  The quarterback, face almost obscured by a hoodie got up and replied, "I'm done" and rudely left the podium.


Posted by NCmountainwoman at 11:35 AM

Think I would need three friends to share one paczki. That is a ton of calories. I too was thrilled with Super Bowl. The classy guy won. Wonder if Cam learned anything except how to pout. He has the talent, just needs to be a little less full of himself. Next year maybe.

You've taught me something new-never heard of the delicacy before. I'm also glad the Panther's didn't win-not only because the Broncos are our home team, but because of Cam's attitude. Couldn't believe the chains on his kids necks. Hope you have a wonderful week.
Hugs, Noreen

Thise treats looked a lot like jelly filled donuts, but after reading the post, they sure pack a lot more calories...or maybe not. I watched the game, but didn't see the press conference afterwards. It seems that some people do not know how to be gracious when defeated.

Paczkis sound a bit like cinnamon rolls in terms of being dietary disasters. When we travel, I often see people mindlessly grab a cinnamon roll to add to their order, and I can't help but think about the fact that they are about to mindlessly consume an entire day's worth of calories and fat. But, I probably would be more fun if I loosened up about things like that :)

I watched my first football game of the season last night, and I saw the quarterback contrast you'd written about. Wow - it made me really like Peyton Manning. After watching him, I'm proud to share a spine surgeon with him! The upstart was appalling, both in certain on-the-field actions and after the game. Your analysis was right on.

I don't watch football, but I learned something new. Paczkis... a dangerously fattening treat that looks a whole lot like a jelly donut, which I'm familiar with. Thankfully, I'm not a fan of jelly donuts, although I do like donuts.

So funny that you posted about these calorie laden pieces of pastry; I'd heard about them on the radio this morning. How have I gone this long without knowing about this tradition? I too would not be able to eat them. Well, maybe ONE bite wouldn't hurt. HAHA.
Laughing at your commentary about the game. I agree.

Happy Paczki Day from Cleveland, where they will be the Top Story all day and in break rooms and teachers' lounges in most of NEO. The traditionalists will frown upon the new flavours and insist upon lekvar, or prune, as you said, but the big winner was the scrambled egg and bacon filled one that had the dough enriched with a local maple infused craft beer.

Now, pierogis--show me the line. I'll stand in a pierogi line--if they're made by the little old ladies at the Russian Orthodox church--for as long as it takes.

I just discovered punch keys this week when my husband brought some home frim the grocers. I read the fine print on the box which explained part of what you stated - using up staples before Lent and having them on Fat Tuesday. My blog yesterday was about the "jelly doughnuts" which are called berliners in Germany and krapfen in Austria.
Your photo of the landscape is beautiful.
marlu

We often went to Milwaukee to see major league baseball before the Twins. My dad love Maders and I followed with my boys taking them to the wonderful zoo and then checking out the neighborhood German bar/restaurants. Now my wife and I try to make a trip once a winter to warm up in the Mitchel domes or as I think you once put it the Polish boobs???....:)

Patti - I'm not sure Cam is ready to grow up. He makes too many excuses, just like a middle school kid.

Noreen - I had never heard of them before we moved to Milwaukee. Now, several bakeries in nearby Asheville advertised them for Mardi Gras.

Beatrice - You said it perfectly. Cam himself said that he doesn't want to be a gracious loser...he wants to be a winner every time.

KB - Yes, we definitely do need to evaluate the things we grab to eat. My husband used to love pecan pie. Then he found out the calories and fat grams and never ate another slice. No need to you to loosen up about that. You have the proper attitude. Most of the folks who indulge feel terrible and ask themselves, "Now why on earth did I eat that?"

Ms. A - You're right. It's far more than a jelly doughnut.

Suz - Twice in one day. Now you will never forget about them.

Nance - Thanks. Yes, there are many purists who think it shameful to add those different fillings. Even after all those years in Milwaukee, I did not have a pierogi. Saw them lots of times but never tried one. Looks like I really missed out.

marlu - Thanks for dropping by. Look forward to visiting your blog.

Troutbirder - Yes, Milwaukee was a great place to raise kids.

I'd never heard of paczkis until we moved to Ohio, but once I found them I didn't want to let them go. I think my super power is being able to eat multiple doughnuts or paczkis at a single sitting :)

I love hearing about the differences in regions. We felt like we were in a foreign country when we moved from suburban Florida to rural western NC.

I'm not a football fan so didn't care who one (I was in the kitchen frying chicken during a good bit of the game. And, yeah, Newton's postgame behavior was graceless, to say the least.